Halloween has been all the buzz in our home lately. The girls still haven't quite decided what they want to be yet. Powerpuff Girls, fairies, angels, or witches...decisions...decisions.. One of our favorite movies to watch this time of year is Tim Burton's The Nightmare Before Christmas. We just love silly old Jack and his beloved Sally whom he just never listens to. These two characters inspired me to crochet my new hat designs. Introducing: Nightmare Sally and Pumpkin King Jack Hats 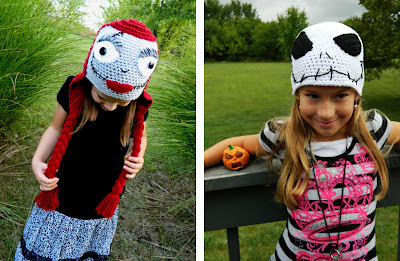 I had made a Jack hat awhile back but wanted a different design for this hat. 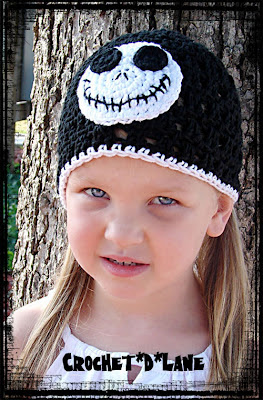 Instead of a crochet applique of Jack on the hat, I wanted this hat to be of Jack's face, but more of a wicked smirk on his face rather than his nice guy type smile. 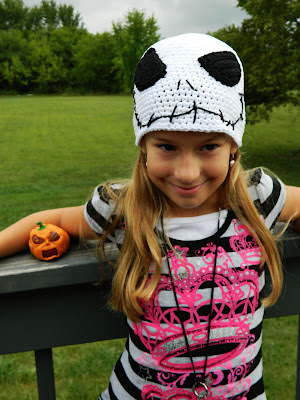 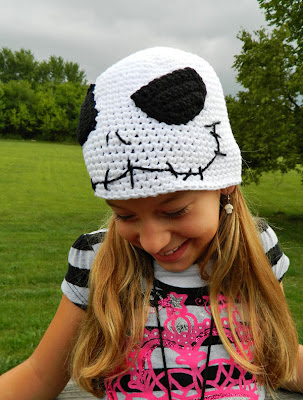 For the Nightmare Sally hat, I went wild and paid attention to details. I wanted her eyes to be almond shaped and large and I wanted her darker grey eye shadow to really "pop" with those rag doll eyelashes. I also wanted her blood red lips to be smaller so that I could make her mouth stitches longer. I didn't want to forget her extra stitches underneath her eye and across her forehead from a previous tear from something we can only imagine. For her hair I used a blood red color and did a texture style stitch to resemble actual hair. I made the bottom of her pigtails into ear flaps and then braided the ends. 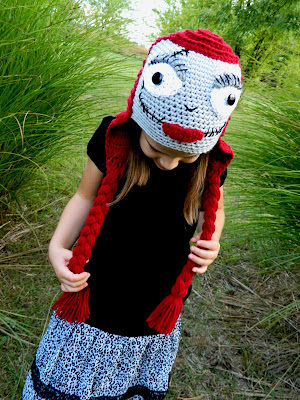 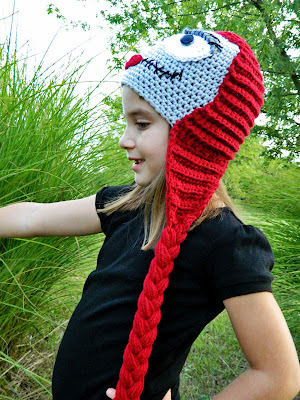 I am hosting a giveaway on Facebook for your chance to win either a Pumpkin King Jack hat or a Nightmare Sally hat; your choice. I will custom make the hat to fit an infant size up to an adult size. The winner will be chosen Friday, September 14th, 2012 via random number generator. All you have to do is like my Crochet D Lane Facebook page, leave a comment stating which hat you would like to win, and if you would like another chance to win, share the giveaway post on your Facebook page publicly and then leave me a comment stating that you have shared. You can find the giveaway HERE.

Don't want to wait for your chance to win and want to purchase them now? You can find Nightmare Sally Hat in my Etsy store HERE, and Pumpkin King Jack Hat HERE.

Posted by crochetdlane at 8:43 AM